Appearances May Be Deceiving

It’s interesting how people interpret tools we use in training, without learning the intricacy of how and why they are used.  I think it may be the social setting or society one lives in that is decided on what is and is not acceptable practices.  For example, in Spain, when people greet one another they kiss on both cheeks.  Now if I did that to someone here in the United States I would get a big shove and asked, “What are you doing”.

I’ve been told in Europe if you want to travel with your dog, the dog must be in a muzzle.  People in Europe view muzzles as a fact of life.  In the United States it’s viewed as a negative.  Police services train their dogs to wear muzzles, not because they are out of control or vicious, but for training purposes.  In police or protection training the muzzle is used as a method to teach a dog to fight or to bite a person who is not wearing the typical protective gear.  We were camping once and my police canine was wearing a muzzle.  He did look like Hannibal Lecter, but people kept their distance, assuming he was vicious.  He was just lying on the ground enjoying the weather like the rest of us, paying attention to no one. 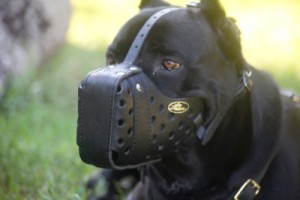 Some of the dogs I work with now have aggression issues. The family’s request as part of the dog’s training, that they are conditioned to wear a muzzle.  Muzzles give assurance to the owner their dog won’t bite anyone and at the same time give them the confidence to take their dog on trips, practicing the handling skills I have taught them.  When you own a dog who doesn’t like children, men, strangers, whatever, just tell the people my dog doesn’t like __________ and you cannot pet him/her.  It’s really that simple.  Do not force your dog to say “Hi” if he/she is uncomfortable or nervous around certain type of humans or dogs.

I have a friend who moved to a new house and his dog went from living in a kennel attached to the garage to living in their home.  The dog was getting up in age and he didn’t really want the old boy in a kennel.  The dog was a retired hunting dog.  The issue he had was the dog was experiencing separation anxiety when he left the house.  The dog had always been in a crate when they went hunting and accepted the crate well.  However being crated alone in the home was another issue.  The dog was trying to chew his way out of the crate and causing damage to his gums.  He resolved it issue with a muzzle and some sedatives recommended by his veterinarian.  The dog no longer hurt himself and was able to stay in the crate when they left the home.

For normal training, protecting from dog bites and the dog, I recommend Baskerville Muzzles.  They are easy on the dog, made of rubber; the dog can take treats and drink water with the muzzle on.  They come in sizes 1 -6 and fit a variety of breeds.  When introducing the muzzle to the dog, let him/her sniff it first and treat the dog.  Slide in on, secure it and treat the dog again.  If they try to pry it off, say nothing; no touching, not talking, just let the dog be.  Once they realize they cannot get it off they will accept it.  Do not take the muzzle off if the dog is struggling with it.  Wait them out, take them for a short walk and then remove it. 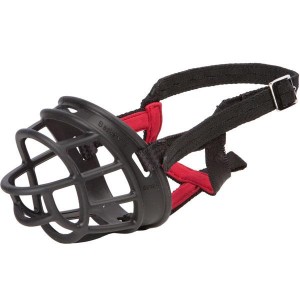 The next time you see a dog with a muzzle, don’t look away, taking your child by the hand and disappear.  It’s no different than if the dog had a doggie wheel chair.  It’s just a tool to make everyone safe.