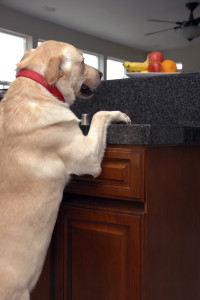 10. Telling your dog “It’s okay”. Stop telling your dog “It’s Okay”. The dog thinks you’re praising him/her. Get your dog moving or do something else rather than staring at whatever is making the dog nervous or aggressive. It’s okay = Good Boy Duke! When your dog is in an unbalanced state of mind do not touch or talk to your dog unless you are giving a command. You are encouraging his/her behavior by doing this.

8. No Recall is when your dog does not come when called. To me it’s like nails on a chalk board, listening to someone run after their dog calling him/her again and again. The dog runs off sniffing and totally ignoring the owner. The dog acts like it doesn’t even know its name. When you say your dog’s name he/she should look at you.

7. Jumping is another irritating behavior people allow their dogs to do. You are dressed up nice and a dog jumps on you, not cool. How about the dog needed his/her nails trimmed 3 months ago and he/she jumps on you, I have one of those staying here at the kennel this week, ouch that hurts! Or better yet your dog jumps on a person who is elderly or fearful of dogs.  In the same category is counter surfers.  A counter surfer jumps on the counter to steal food.   This is a behavior that must become extinct.  Here’s a tip for you owners with dog jumpers, plastic bottle with change in it. Shake it at your dog and say “off” each time the dog jumps. Don’t leave food on the counter unless you are able to watch your dog and discipline him/her for going for it.  If that doesn’t’ work come and see me. I would be happy to help you out with your dog. We teach manners.

6. Nuisance barking are calls I used to go on as a police officer. That’s right your neighbor will make an anonymous phone call complaining on your barking dog. The first time is a warning and the second trip is a citation. Don’t be one of those dog owners who allow their dog to bark all the time, its rude. There is a neat little device called a No Bark Collar, made by Dogtra. They work great and I have had people tell me it also calmed their dog.

5. Begging can be quite embarrassing when you are entertaining. Begging is when the dog stares, drools, barks, paws guests to get a treat. First of all don’t feed your dog people food and you won’t have that problem. If you have already started the issue now you need to teach the dog to stop. Begging can be stopped by not giving any more food from your plate and to teach the dog to go and lay down away from people who are eating.

4. Obnoxious happy dogs especially the little ones sure are cute, but guess what? It’s not my dog and I don’t want to pet him/her so keep your leash pulling jumping dog away from me. I was in a pet store once with a little poodle on a harness. He was on his hind legs, leash tight jumping, and pawing at me with its front paws. It thought you are cute but I’m not going to reward that behavior. I looked at the owner who was obviously use to that behavior. I like calm well-mannered dogs, not the ones that think everyone in the world needs to show them affection.

3. Dog hoarders are people who have multiple dogs in their household and cannot control any of them. Let me explain something, if you own one dog and it’s a pain in the neck because you haven’t trained him/her don’t go out and get another dog. If your dog eats the furniture, pees in the house, and digs holes in your yard getting a companion for him/her isn’t going to solve your problem it’s only going to double it. I have had people with multiple dogs come to me for dog fighting issues.  I can get the dogs to live with me without fighting, but you cannot. I have worked with dogs that do fine with me and as soon as they go back home the fighting starts up again. Dogs fight because you are not strong enough to take control and teach them fighting is not acceptable. In addition you spoil the crap out of the dog and don’t enforce any rules. If you have fighting dogs, rehome them.

2. Unsecured dogs in cars make me nervous because when you are involved is an accident your dog becomes a missile. You buckle your children up in car seats why wouldn’t you keep your dog from serious injury or worse yet death? For those who let little FIFI sit on their lap while they drive your airbag will kill your dog. How about dogs allowed to hang their head out the window. If a dog can stick his/her head out the window they can jump out. Does your dog chase squirrels? How about you stop at an intersection and your dog sees a squirrel or cat? I had a co-worker who used to let his dogs ride in a back of a pickup truck. After a bad case of road rash he doesn’t do that anymore. I love animals and have seen some pretty bad things because dogs rode loose in cars. Transport your dog in a crate or seatbelt device and keep your pet safe.

1. Marking and peeing is a big no no and I bite my tongue every time a dog urinates in my training facility. Marking is a behavior by some dominant male dogs and I have had customers come in my lobby totally oblivious to their dog as they cock their leg and pee on my wall. Really? The other scenario is that people are so busy with their lives they don’t give their dog the opportunity to potty. It’s happened time and time again I am working with a dog and they pee and poop in our training room. If your dog poops inside a building it’s your fault. Break your dog before you leave the house and leave early enough to walk them around when you arrive to relieve themselves again. You should know your dog’s habits, it is your dog. My male will always go potty when I arrive somewhere, so if I’m running late, I don’t care I will take the time to let him empty out.   If you have a male that has a marking issue, neuter him. In addition keep an eye on him and on  a leash whenever inside. Be firm with him if he tries to mark. If you don’t take control and have consequences for marking he will continue to do it.