Nail trimming can be a daunting task especially if you are not confident in your skills. I have been trimming my dog’s nails for years and it’s really not that bad as long as you condition your dogs to have it done. Nail trimming is a grooming component that must be done. If not your dog’s nails will grow to the point that they will cause discomfort and possibly harm your dog causing tendon damage. If you hear your dog’s nails clicking on the hard wood or tile floor its time do trim their nails.

The first step with young dogs is to condition them to accept having their feet handled. Give treats as you handle your dog’s paws. You should also condition your dog to accept being held. If they wiggle and try to break free, just hang on and snug them a little closer to maintain control. If they start crying don’t let go. If you release them when they cry you will teach them that crying gets what they want and they win. The dog should never win, you win. Once the dog learns your way they will become more submissive and allow you to handle them.

I do not use clippers to trim nails but a Dremel tool. The Dremel tool is a hand held grinder that has several attachments. I use the drum with medium sandpaper. Set the Dremel on low, handle your dog’s paws and let them sniff the Dremel Tool. Treat the dog. Turn the tool on and off, then treat your dog. Do this several times. I start trimming my pups’ nails at about 12 weeks using this method. Take just the tip off of each nail. Give generous treats. My adult dogs just lay and let me do their nails. They don’t necessarily enjoy it but they do know there will be treats coming. 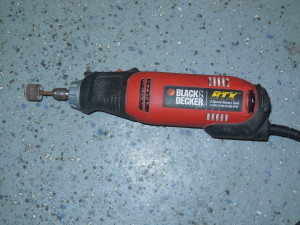 The blood in the nail is called the kwik. If you hit the kwik the nail will bleed. I normally take off 1/8” to ¼” off the nail depending the size of your dog. If your dog’s nails have become too long you still only trim a little bit, because if you try and take off too much you’re going to make the nail bleed and hurt your dog.  If  you let the nails grow too long, you need to trim weekly until the nail is at the desired length. The kwik will gradually work its way back as long as you trim weekly and take your time.

With light colored nails you can see the quick and judge by seeing but black nails there is no way of seeing the kwik. Some dogs fight nail trimming. My wife had a police dog that would not allow her to trim his nails. We muzzled the dog and I had a fight on my hands trying to restrain him and he would have bit me without the muzzle. I eventually pinned him to the floor and Julie trimmed his nails. By the third paw he started to relax. After I was definitely out of breath after wrestling around with an 85 lb. German Shepherd. The next time she wanted to trim his nails she brought me the muzzle. I told her you won’t need that, just tell him to lay down and trim his nails. She was surprised he did exactly as she told him and allowed her to trim his nails. He learned from the first nail trim that fighting was not going to work and there are no options, he is going to get his nails trimmed. You just have to be firm with your dogs and they will let you do it. It may take two of you the first couple of times, but all dogs should let you trim their nails. People get into trouble when the let their emotions get the best of them and they don’t want to hurt their little dog either emotionally or physically. If you’re going to be emotional about it you lose. Dog’s look at your emotions as weakness.   Don’t be weak. 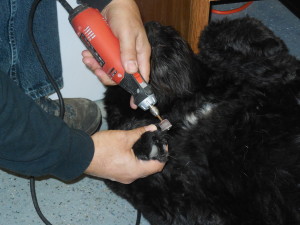 I had another customer whose dog that I trained, said he was impossible to trim his nails. She brought the dog to me and I trimmed his nails. The dog didn’t fight or make a fuss. She was shocked at how quickly we were done. I explained I use a Dremel tool and I’m confident in handling the dog. I think dogs pick up on that and as long as you know what you are doing the dog stands there and like a horse getting is hoofs trimmed and shoed.

Nail trimming is just like dog training. Don’t let the dog make the decisions and he/she has to do what they are told. 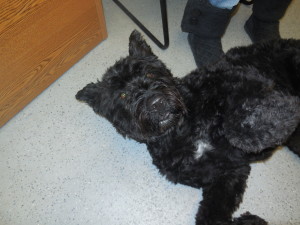