My Story; How I Became a Dog Trainer 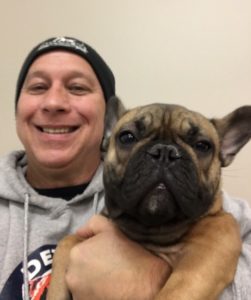 How do people end up becoming hairstylists, electricians, or entrepreneurs? I believe we are each given gifts when we are born and you develop those gifts to become the person you are today. Making good decisions is also a key to living a comfortable life and doing something you are good at. My dog training career is different than most.

My family always had dogs when I grew up in the 60’s and 70’s. Our dogs were not typically friendly. They tried to bite the mailman, did not like strangers, ran away and resource guarded. Nobody hired dog trainers in those days. In fact, I don’t think there were any, at least not in our area. Now you can find 25 dog trainers within a 50-mile radius. I was not involved in 4H, FFA or any other activity that involved animals. I just knew I loved animals. My family didn’t hunt, so I did not have any experience in wild game either. The only wild game I saw was on Mutual of Omaha’s Wild Kingdom.

When I was 29 years old I became a police officer. My first Field Training Officer was a K-9 Handler. I admired how well his dog was trained and loved watching the dog work to find narcotics and bad guys. After 3 years of honing my skills as a police officer I was selected to be a K-9 Officer. I was pumped and so was my family. My first K-9 was an all-black German Shepherd named Quince. Quince was an 85lb, 18-month-old ball of energy when I was paired up with him. Quince and I spent 4 weeks at a Police Dog Academy and when I returned to work I thought I knew all there was in handling and training police dogs.

Reality set in when a handler from a neighboring city showed me I didn’t know squat. My police dog did not out or recall. The Out command (meaning to let go) is extremely important since the dogs need to let go of suspects when they are biting them. If the dog decides to chase something, he needs to stop in his tracks and come back to the handler when called (recall). I also learned that these highly motivated athletic animals are not allowed to chase anything unless directed to do so by the handler. I had my work cut out for me. So we worked on out, come, and control for months until I had very good control of this dog.

Quince caught a lot of bad guys and on my first narcotic search we found crack cocaine. I have a YouTube video of an actual Robbery Complaint I responded to with one of my other police dogs named Baron. Check it out below.

As I continued to train with Quince we learned from other trainers and continued to improve. We competed in police dog competitions; we were the top police dog team in Michigan and ranked 20th in the United States. Quince recalled 99% of the time. He was an animal and no one is perfect… or so I thought.

As I grew as a handler my police department took notice and made me the department police dog trainer. We had 4 dog teams within our department and I also helped handlers throughout the state improve their handling skills. I was always looking at better ways to train, and that is when I was introduced to the Remote Training Collar.

I was sold on Remote Collar training when I saw my already highly trained police dog get even better. My control improved tremendously. My recalls were 100%, as were my outs. The remote collar is like having an invisible leash on my dog. I can get his attention when ever needed and it helped improve focus.

Once I was 10 years into my career, I decided when I retired I would like to help pet owners and pass my knowledge onto them. I knew there was a need because I saw it on a daily basis. It’s common to see owners getting dragged around by their dogs and out of control dogs trying to attack. While still an officer, I would be taking complaints in people’s homes and their dogs would jump on me. I was also dispatched on hundreds of nuisance barking complaints. In 2009, I started my pet training business out of my house. In 2013, I retired from the police department and opened my Training Facility in Hudsonville, MI.

What I love about dog training is the smiles on the owners’ faces when they see how well their dog can behave. They love to see the control and calmness their dogs project as I am heeling, placing and downing their dog. They are amazed at their dog’s focus especially, when some did not even recognize know their name before training. I love to hear from the families we have helped as they brag about how well their dog is doing now. I love my job and I love the dogs I am able to help.