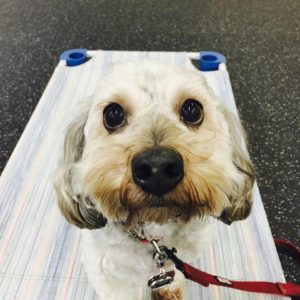 Little Tucker came to us biting the males in the family, including the woman’s husband and teenage son. The bites were serious enough to be causing punctures, so something had to be done with Little Tucker. The family stood in our lobby with this little dog that probably didn’t weigh 10 pounds. I asked the owner to fill out some basic information as we talked. The Mom filled out the evaluation form and said Tucker listens to her much better than her son and husband, and that he follows her everywhere around the house.

Little Tucker lays on the couch with her and sleeps in bed with them. Dad works odd hours and comes home late at times. Little Tucker will not allow Dad in bed. Little Tucker growls, stiffens up as his eyes dilate, and is very quick to bite. As we talked I concluded that Little Tucker was resource guarding.

Resource guarding is the act of protecting anything of value that Tucker perceives as his. In his mind, he owns Mom, her daughter, the furniture, and the house. Tucker is nice enough to allow Dad and their son to live in the same house, but under Tucker’s rules. Obviously, they did not want to re-home Little Tucker but there was some rehabilitation that needed to be done for the safety of the males in the household.

Before I even agree to work with a dog like this I always have a brutally honest talk with the owners. Along with our training, they need to agree to make some changes in the household. Tucker no longer sleeps in bed with them and is no longer permitted on the furniture. He cannot lay at Mom’s feet at night while she watches television. In addition, Tucker needs to learn some behaviors like no leash pulling, not jumping, waiting at the door for the owner to go through first, and coming when he is called and to place. Tucker was a leash pulling, jumping, door escaping, not listening spoiled little brat who thought he was in charge of the home.

The first days of training came and Mom confessed she let Tucker sleep in their bed for the last time. She asked what to do for sleeping arrangements for Little Tucker and I told her crate him. The next day she was extremely surprised on how well he did. He fussed a little, but went to sleep and slept all night. We did this for several days until we taught him place. Once his place command was solid, I told her to put his place board in the bedroom but to back tie him so he couldn’t leave it and jump in bed with them. Do that for a few nights and then stop back tying him. Mom said the system was working great! In fact in the mornings he used to get in bed with her daughter and growl at anyone who tried to remove him from her bed. He now loves his place board and stays on that as Mom gets ready for work in the morning. I warned her though that he would most likely going to start guarding the place board and sure enough that exactly happened.

I instructed her to treat him when he’s on his place but other than that have no contact.. The place should be his one safe place in the home where he is to be left alone.

As we trained, though it was not easy, Tucker learned to follow the human. He stopped leash pulling, started to wait at doors (that was a difficult one for Tucker), placed like a champ on a place board, came when called and even learned the down command. Tucker was coming along nice simply by changing the routine at home and incorporating training/structure. We were then able to give Tucker’s family a loving dog they always wanted. In turn Tucker was a more relaxed, happy dog. Sometimes it takes some tough love to help dogs. Love alone can’t fix it, but the right training program can help us learn to love our dog’s behavior.